Travels in the Azores

16 Aug, 2020
Travel with Pat Newth, through 10 days in the Azores. Explore beautiful landscapes across the islands. 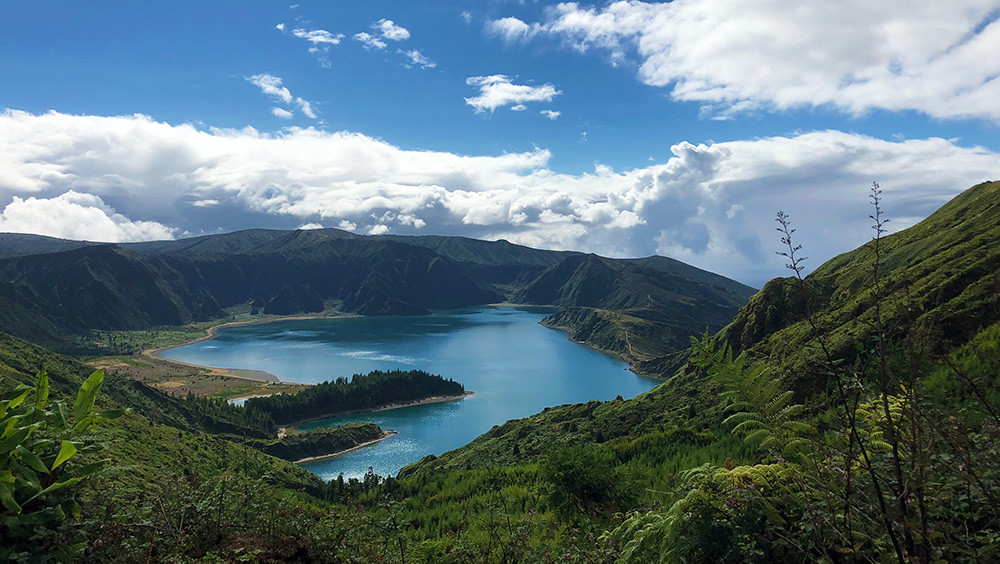 It wasn’t only mainland Portugal that suffered a wet winter this year.We spent 10 days of the Easter break in the Azores and it was a major understatement to say that the weather has been better! Despite that, we had a wonderful vacation.

The Azores are relatively young islands formed from volcanic activity under the ocean. The most recent change to the map of the Azores was in 1957/58 when an eruption which began off the West Coast of Faial added a further two square kilometres of land to the island over a period of several months.

The Azores are easily reached from Lisbon on either their own airline, SATA, or on TAP. There are frequent flights and bookings can be made online. Each of the nine islands has an airport so transferring from one to another is not difficult and the inter-island flights on relatively small aircraft can certainly be interesting. During the summer months it is also possible to travel between some of the islands by ferry, but in winter that is not really an option on most routes.

It is necessary, and very pleasant, to adjust to the local pace of life, which is wonderfully relaxed and far slower than we have all grown used to. Things take longer, this just has to be accepted, why be in a permanent hurry!? In any case, one can’t do anything about weather conditions or delays and changes to transport arrangements are not the end of the world. We had planned to visit three of the islands, with a 20 minute touchdown on Terceira en route from São Miguel to Pico. That turned into a 20 hour stay because, when we got as far as Terceira, it was decided that weather conditions on Pico were too extreme for the flight to continue. SATA put all the passengers into good hotels and provided meals. The bad weather soon hit Terceira too and the gusting wind and lashing rain were too horrible to even contemplate taking advantage of the opportunity to do a little exploring on an additional island.

It would take a holiday of several weeks to visit all nine islands which are spread over about 600 km of ocean, so to start with, it is necessary to choose which to include. We flew to the largest island, São Miguel. A highlight at this time of year is complete hedges of camellia bushes in full bloom and azaleas, neatly trimmed and covered in vivid flowers. Along the way we saw numerous small enclosures created by making dry stone walls from lumps of volcanic rock and used to protect growing vines and other crops. The island gives an overall impression of being carefully groomed and much loved by its inhabitants. We were intrigued to know the identity of a crop we saw all around us and were informed that these were yams. The gardens of the Terra Nostra Hotel in Furnas are a must, developed by a prosperous merchant from Boston, Thomas Hickling, in the 18th century. Half a day can easily be spent wandering in these lovely surroundings and swimming in the mustard coloured warm water of the bizarre pool. It is fascinating to see the Caldeiras das Furnas, where hot and often boiling water bubbles out of the ground. About 4 km south of Furnas is the Lagoa das Furnas and the ground there is so hot that the Islanders produce cozido, a meat and vegetable stew, which is cooked underground for up to six hours. A drive around the coastal road at the eastern end of the island is breathtaking, a trip to the Legoa do Fogo is strongly recommended. There are two tea plantations near Ribeira Grande and a visit to the Gorreana Estate was extremely interesting.They continue to use old methods and original machinery. The northwest of São Miguel has a giant volcanic crater, Caldeira das Sete Cidades, with a challenging walk on the rim and spectacular views. The capital of the Azores, Ponta Delgada, is charming with plenty to explore. It is a challenge to find them, but the pineapple plantations in the outskirts of the city, where the fruit is grown under cover, are open to the public.

The other two islands we visited were Pico and Faial. These islands are only 8 km apart and are connected by frequent ferry crossings. Pico is the highest mountain in Portugal and the summit of the volcano is more than impressive although we had to watch carefully to catch a glimpse of it between the scurrying clouds. The drive around the coast road of Pico was interesting and we did try to drive up towards the summit but got lost in the cloud and decided it would be sensible, to say the least, to retrace our steps to the coast road. Off the main road there are small villages where most of the houses are old and built from volcanic stone. It is on Pico and Faial that the whaling industry was centred and in the summer months it is from these two islands that the majority of the whale watching expeditions set out.

We visited two excellent museums during our holiday. One was the Museu dos Baleeiros in Lajes on Pico which gives a comprehensive description of the whaling industry and is complemented by another museum, a former factory for processing the whales, which is located at São Roque do Pico. The other very impressive museum is the Museu dos Capelinos on Faial, situated where the eruption took place in 1957/58. It is an information centre about Capelinhos as well as volcanoes and eruptions in general. It is particularly interesting as it has been developed inside the lighthouse buildings which were partly buried by ash during the volcanic activity. The actual lighthouse is still standing and it is possible to climb up to the top from where you get a stunning view of the new part of the island which is still black and barren. The nearby whaling village is completely covered. Many of the Azorians who emigrated to the USA during the 20th century did so at that time, when the American government changed its policies to allow people affected by the disaster (and many others, too) to take advantage of the opportunity to start a new life. This coincidentally helped the islands solve the developing problem of overpopulation which meant they were struggling to support their people.

The Azores provide plenty of walking opportunities and full days with a simple picnic lunch are a delight. It has to be said that in our case these walks were often a very wet experience and at any time of year there is no guarantee of sunshine. Often the tops of the islands, or even the complete islands, are wrapped in the cloud.

We would definitely recommend that a hire car is the best way to make the most of each island. We thought on the smaller islands it would be cheaper to use taxis but this certainly was not the case so we changed plans and hired from the local office. I suspect that in summer this may be more difficult with a limited number of cars available on each island. In any case with a car at our disposal we were free to explore wherever we chose for as long as we wanted and to stop and start as often as we liked. The hotels we stayed in were excellent and we always managed to find something suitable for dinner although it must be said that there was considerably more choice in Ponta Delgado than anywhere else we went.

We are grateful to Flávia Soares and Sally Branston for their help during the planning stage of our trip. The Azores are magnificent, even in the rain! We would certainly recommend anyone to take a look. Each island has its own “personality” and scenery. The vegetation is lush and green, the flowers stunning, the mountains majestic and the air fresh and unpolluted. Seldom will you see such contented cattle in roadside fields! However, if we return we will choose to go in the summer months when there is a much better chance of good weather!